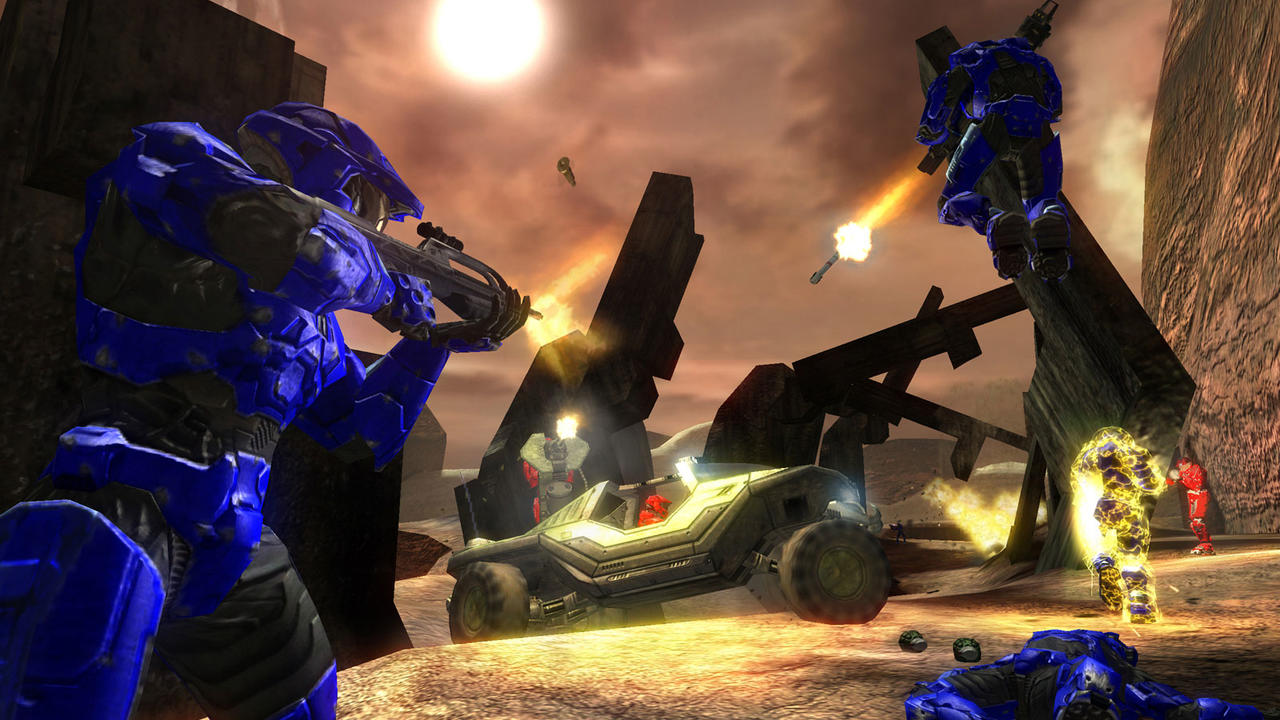 With the release of the Master Chief Collection, a new wave of tournaments and aspiring pro players have begun to grace the competitive Halo scene.  With this resurgence in Halo as an eSport, THF will be publishing articles discussing and reflecting on the retired Halo legends of yore.

Chris Smith , better known to the Halo community as “Shockwave”, began his professional gaming career playing under the handle “Red Alert”.  Hailing from Berwin, Pennsylvania , it is reported that his very first major event was Halo Nationals at Philly ‘04

Smith truly began his competitive gaming career competing under the name “Red_Alert” at MLG 2005 season opener in Washington D.C.  For his first major event, Smith did very well, placing 4th in the 4v4 alongside StrangePurple with team FinG BLiPPeD.  As one career ended, another began to sprout.  However, it was not until a couple of events later at MLG St. Louis, when Smith decided to don a new handle; ShocKWav3.  As Smith put it, “I had the name Red Alert back in Halo 1. When Halo 2 started, I didn't know if I was going to play as much and I just wanted to play with friends, so I wanted a new name. I got Shockwave from one of the Counter Strike teams, which were big at the time.”  The name switch turned out to be a great decision as ShocKWav3 won the Free for All competition at St. Louis and came in second in the 4v4 with team iGameSpot.

The 2005 season panned out with StK/3D running the train on most of the competition in the 4v4 and FFA, with a few exceptions.  Shockwave took home 1st place in another Free For All event at MLG Seattle, beating out Strongside in the finals.  Smith actually swept the event, winning the 4v4 portion of the tournament as well.  IGS edged out an early rendition of Storm Ventures for the gold.   Not enough credit is given to Wav3's indivdual and free for all ability, as demonstrated in 2005.

Although many fans and players were not quite sold on the skill level of Shockwave and IGS, the doubters were proved wrong at MLG’s 2005 National Championships in New York City.  For the season finale, Shockwave and crew decided to compete under the name Team Phreaks, due to the insane amount of individual skill posses by Gandhi, Karma, Strongside, and of course Wav3.  Ultimately, the squad fell just short to heavily favored 3D in the grand finals.  The set featured the most intense games and highest level of skill that Halo fans  had ever witnessed.  Team Phreaks took the Ogres to game 10, Midship Oddball; if you ever wanted to know how to with the objective on this map, check out this gameplay.  Although the young roster did not achieve what they set out to, the performance at MLG New York put everyone on notice for the 2006 season.

The 2006 Halo season saw two distinct changes.  First, many of the old school competitors left the scene, secondly, Team Phreaks (now dubbed as Carbon) and 3D (now dubbed Final Boss), created a large skill gap that separated themselves from the rest of the competition.  However, for the first half of the season, no one knew this.  Final Boss continued to place 1st and every single 4v4 event they attended.  After about 2 full years of complete domination by the Ogre twins and Walshy, people began to wonder whether or not Halo’s first Dynasty could be bested in two tournament sets.  Up until MLG Orlando, it seemed universally agreeable that every event was just a fight for second place.

Wav3 put it together nicely when he said, “I think what was most different with our team was the mentality. After playing with Strongside for a few tournaments and failing to win, I could tell we were starting to get frustrated with each other. Ghost was a breath of fresh air and had a great attitude and just wanted to help fill in wherever he could, basically molding his game to our team as opposed to us trying to mold our game around him. And to take down Final Boss in Orlando 2006 was just amazing. After years and years of playing the game, all I wanted to do was win a tournament and be the best. It was something I had wanted to do since I picked up Halo: CE back when it first came out, and to finally accomplish something you put so much effort into felt great.”

That was until Carbon got sick of losing and made the bold decision to drop Strongside, who had been making many questionable decisions in game, and steal eX’s Gh057ayame.  In recent videos by Gandhi, fans learned that the Carbon was actually torn between picking up Ghost or Defy since the team had won an event with Defy back in 2005.  Ultimately it was probably for the best that Gh057ayame was added to the roster.  Ghost’s methodical approach to the game, combined with his nasty support and objective skills proved to be the key to upsetting Final Boss.  Carbon went on to beat FB at MLG Orlando, the playoffs at MLG New York, and finally the National Championships at MLG Las Vegas.  The group of skilled high schoolers took home a $100,000 check, which at the time was the largest payout ever for a Halo tournament.  The win was especially sweet for ShockWav3 who got the game winning kill on Beaver Creek Team Slayer.

Carbon was on top of the world after the 2006 season; however, their success did not immediately translate into the 2007 season until MLG Dallas.  For a team that seemed poised to be the guys to beat going into ‘07, Carbon went back to their streaky placings.  Carbon was still taking home checks, but with only one tournament win on the season, Carbon went into the MLG National Championships determined to bring home another gold medal.  Maybe it was the fact that the guys on Carbon felt more comfortable being the underdogs or maybe they had gotten complacent after 2006.  Either way, Carbon finished the 2007 season proving to everyone that they were still a Top 2 professional Halo team.  After showing up Str8 Rippin in the loser’s bracket finals, Carbon got skunked by FB in the grand finals.  The loss was devastating to Wav3 because not only did Carbon fail to take a single game from FB, but the player that seemed to be the reason for final Boss’ comeback season, and championship success,  was the same player that they dropped the previous year; StrongSide.

Whether it was how the previous year finished or the new game being used on the circuit, Carbon never again won a tournament.  In Smith words, “The game is different. For me, it's the 360 versus the regular Xbox. For the longest time, I couldn't get it down right. The analog stick felt so different, so foreign. Also, Halo 3"has a completely different feel. “  In 2008, Shockwav3 saw some of his best friends leave his team, and eventually, the scene altogether.  However, even with the inner turmoil, Wav3 prevailed.  He kept the name Carbon intact and competed at MLG events for the reminder of the 2008 season and all of the 2009 season.  In that time, Shockwave managed to finished 3rd at both Halo 3 National Championships he competed in.  After 2009, Wav3 decided to join his longtime teammate Gandhi in the booth and supply commentary at MLG events for the next couple of years.   And although Shockwave’s last tournament victory came in 2007; the way he finished in 2008 and 2009, and his decision to cast and stick around the competitive Halo scene garnered him a great amount of respect from players and fans in the community.

Even to this day, most people consider Shockwave as one of the top 15 greatest Haslo players of all time.  His success against the very greatest of competition, Free For All prowess, and overall accomplishments as a leader, showcase how Shockwave approached the game with a winner’s mentality.