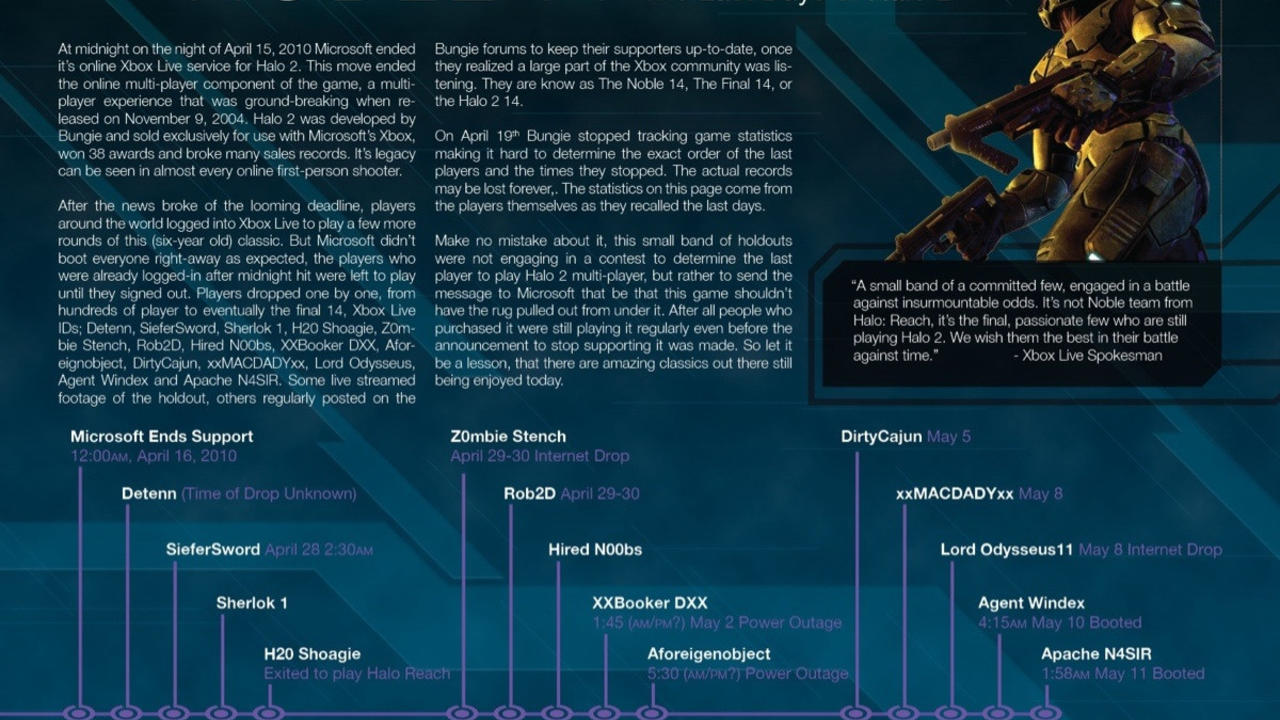 This was written in the context of the MCC Launch troubles.

To give somewhat of a perspective on what you have through MCC for the foreseeable future perhaps this story can enlarge the appreciation of playing h2c online when you do get a game or just give you something to read while searching.

This thread is about staying online after april 15th when the servers would have been shut down for ever.

For a flashback to pre-april 15th 2010 here's how we felt when we heard it was going offline (OP Story by Midpoint from a Gamer Grows Up).
http://www.halo2forum.com/halo-discussion/288634-halo-2-xbox-live-eulogy...
incl. beautiful stories by awesome people which makes for great quotes like

by KSP89. Kelis was wrong. On November 9th 2004, it wasn’t milkshakes that brought the boys to the yard. It was a game by the name of Halo 2—a game which has proved to be an anomaly in the best and worst of ways.

Here you can read a short 2 paragraph lookback from this April by Agent Windex 4 years after it all happened (he was second to last on servers).
The original thread below it and all the old comments should load as well when you keep scrolling down.
http://www.bungie.net/en-US/Forum/Post/2139032/0/0/0/0

It all comes down to it that I blew up my xbox, my disk and no-lifed for 5 days just to get some more games of halo 2 in on XBL.
This because you could keep on playing on the servers if you simply didnt log off of halo 2. Another well known member of this forum, XYOX, stayed on even longer than me although we didnt play together all the way through (he went to an MLG event during the whole thing leaving his xbox on at home). While and after this happened this story got posted on Kotaku 1;  2 and all the big sites back then (see the bungie.net link above for a list of it). Various numbers of players have been called the final.. I always took it as Final 50 as that includes me ;)

Here's the thread where most of the convo during post server shutdown play on THF went down
http://www.halo2forum.com/complete-off-topic/294002-final-hours-h2.html

quotes from that thread:

I dont have anything cooling anything.
just a reg 360. and it's been pretty hot lately.
smells a bit too.

ok so Im checking my friendslist this morning, I see alot of people that were online yesterday offline.. so I was like wtf.
I shower, eat. now I check out mah box..
edit: NOO f.ck
I GOT KICKED OFF!!! WTFFFF
I dunno if my internet gave way for a second or w/e the fuck happened.
We'll have to see how XYOX is doing.

It's an honor to be one of the last 25 people online. Get raped Slater

I uploaded part of what me and my friend sent in for Zola's Halo Retrospect on the subject (will take it down if he ups it to his channel). Most of you can probably see the signs of what I did the night before this interview (this was noon, had hardly slept, I was suffering). It is about how we ended h2, a short intro and then it gets to the subject of post-server shutdown play. That starts at +/- 1:00
Interview:

Here's a video by someone else about it (halo hulk i think):

In the spoiler box below is my video series "Post Fin" I made about it (I made em in a bit of a silly mood so forgive the random text and weirdness). Some clips are from XYOX.

These videos got upped to FBWalshy at the time, Episode 2 has the most chat/atmosphere footage in it. Episode 1 the most fun/good clips and episode 3 most of the games with XYOX. The last part of Ep. 3 has the characteristic mic cut-off that classic halo 2 moments had when you killed someone "OH MY GO----". Episode 4. is what I found when I recovered my crashed laptop/ a mix of everything.

For those who are interested: here's the big montage we were talking about "Fashionably Late" featuring Dutchy, Deathenator and myself: https://www.youtube.com/watch?v=-eQZGRjHVpI
THF Thread: http://www.halo2forum.com/halo-2-videos/387135-slater-ohm-presents-fashi...